The Left has engaged in the futile pursuit of “moving the NDP to the left” since 1933, achieving pretty much the same result as a dog chasing its tail. Anyone who today still harbours hope that the NDP will change in ways the Left would like ought to join New Democrats Anonymous.
Debating the NDP

Like a routed army, battered by the defeats it has suffered in recent years, much of the left seems to be in wholesale retreat, indiscriminately abandoning not only the useless dogmas of Leninism and social democracy, but the principles and analytical tools it will need to re-group in the future.
Thinking About Self-Determination 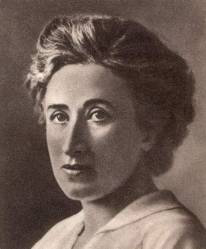 I see Rosa Luxemburg as the Marxist who did the most to carry on Karl Marx’s own theoretical-revolutionary praxis in the period after the death of Marx and Engels. In a time when the socialist movement was evolving in directions increasingly removed from Marx’s positions – toward Social Democratic reformism on the one hand, and Leninist bureaucratic centralism on the other – Luxemburg was the leading exponent of a Marxism in the spirit of Marx.

One indication of this, paradoxical at first glance, is that she was one of the very few leading Marxists who did not treat Marx’s writings as holy writ. Whereas the Marxist orthodoxy of the time, in all its variations, based itself on the assumption that a quote from Marx was conclusive proof of the correctness of a position – debates too often took the form of a battle of competing quotes or competing interpretations of Marx’s writings – Luxemburg was unafraid to say that Marx and Engels had been wrong about specific questions.

In this, she was very much in the spirit of Marx himself. Marx was relentlessly critical, always seeking new knowledge and deeper understanding, never feeling that his own understanding of any subject was adequate – hence his well-known difficulties in finishing any work because he was never finished investigating the subject matter in its infinite ramifications. It was Marx who scoffed “I am not a Marxist” and who said that “Since it is not for us to create a plan for the future that will hold for all time, all the more surely what we contemporaries have to do is the uncompromising critical evaluation of all that exists, uncompromising in the sense that our criticism fears neither its own results nor the conflict with the powers that be.” Luxemburg’s Marxism was critical and ‘Marxist’ in that thorough-going sense.

Luxemburg saw the dangers posed by reformism and Leninist centralism sooner than anyone else. She joined battle with Bernstein’s revisionism in 1898; her book Social Reform or Revolution is in my opinion still the most powerful critique of social democratic reformism ever written. She warned that the results of adopting this approach would be disastrous, and in 1914 the collapse of Social Democracy and the Second International proved how correct her warnings had been.

She also saw the dangers inherent in Lenin’s organizational theories; her 1904 critique, Organizational Questions of the Russian Social Democracy, warned that “the ultra-centralism asked by Lenin is full of the sterile spirit of the overseer. It is not a positive and creative spirit. Lenin’s concern is not so much to make the activity of the party more fruitful as to control the party – to narrow the movement rather than to develop it, to bind rather than to unify it.”

In 1917, after the Russian Revolution, she warned of the danger of dictatorship, answering Trotksy’s dismissive comment “We have never been idol worshippers of formal democracy” by replying that “All that that really means is: We have always distinguished the social kernel from the political form of bourgeois democracy; we have always revealed the hard kernel of social inequality and lack of freedom hidden under the sweet shell of formal equality and freedom – not in order to reject the latter but to spur the working class into not being satisfied with the shell, but rather, by conquering political power, to create socialist democracy to replace bourgeois democracy – not to eliminate democracy altogether. But socialist democracy is not something which begins only in the promised land after the foundations of socialist economy are created; it does not come as some sort of Christmas present for the worthy people who, in the interim, have loyally supported a handful of socialist dictators. Socialist democracy begins simultaneously with the beginnings of the destruction of class rule and of the construction of socialism.” 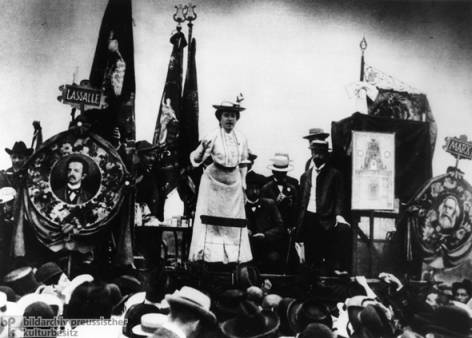 At the same time, she recognized that in conditions of civil war “it would be demanding something superhuman from Lenin and his comrades if we should expect of them that under such circumstances they should conjure forth the finest democracy, the most exemplary dictatorship of the proletariat and a flourishing socialist economy... The danger begins only when they make a virtue of necessity and want to freeze into a complete theoretical system all the tactics forced on them by these fatal circumstances, and want to recommend them to the international proletariat as a model of socialist tactics.” She argued, nonetheless, that the situation in revolutionary Russia demanded intensive political debate and activity, and insisted that “Freedom only for supporters of the government, only for the members of one party – however numerous they may be – is no freedom at all. Freedom is always and exclusively freedom for the one who thinks differently. Not because of any fanatical concept of ‘justice’ but because all that is instructive, wholesome and purifying in political freedom depends on this essential characteristic, and its effectiveness vanishes when ‘freedom’ becomes a special privilege.”

Luxemburg is one of the few theoreticians of the time whose works always seem fresh and pertinent to me when I return to them.

Central to Luxemburg’s importance for me is her revolutionary perspective. She supports pressure for reforms within capitalism, but is utterly clear that reforms cannot bring about fundamental change, that socialism can only come about through revolution, and that the activity of socialists and socialist organizations must always be oriented to the ultimate goal of revolution, no matter what the exigencies of the present situation.

By Rosa Luxemburg
Rosa Luxemburg Internet Archive
Social Reform or Revolution
Organizational Questions of the Russian Social Democracy
The Mass Strike, the Political Party and the Trade Unions
The Political Mass Strike
Theory & Practice
The Problem of Nationality and Autonomy
The Accumulation of Capital
The Junius Pamphlet: The Crisis of Social Democracy
The Russian Revolution
Order Prevails in Berlin