Longing for freedom, and grieving loss: Reflections on watching swifts on a summer evening

The chimney swifts lured me outside again this evening. I’d already been out for one walk, but my door was open, and hearing their calls pulled me out in search of them, as it so often does. They’re active in the evenings in my neighbourhood, and going for a walk in the summer pretty much guarantees that you’ll hear them, though seeing them is not always quite as easy.

The tricky thing about seeing swifts is that you hear them, look up to where the sound came from, and they aren’t there. These are birds that can fly 100 km/hour, so if it takes you a half a second to look up, they can already be 100 metres away. They are called swifts for a reason.

In a sense, they are supremely urban birds, at least during the summer, having adapted themselves to nesting in chimneys a long time ago, though once upon a time they nested in hollow trees. Centuries of logging pretty much eliminated that option, and now they live among us, though as old chimneys get capped or disappear, so do their options for nesting sites. Common swifts and Alpine swifts, species found in Europe, Africa, and the Mediterranean, have been nesting in human-built structures for thousands of years. A swift colony in the Western Wall in Jerusalem has been there for more than 2,000 years: the land has seen enormous changes, but every spring, without fail, the swifts arrive and claim their nests.

Yet unlike other urban birds, swifts have nothing to do with us. They don’t interact with us or hang out in our vicinity in the way that we are used to other birds doing. They don’t perch in trees or on wires, they don’t land on the ground or at a birdbath. They can’t: swifts are so uniquely evolved to a life in the air that they have shed features characteristic of most of the birds we know. Their feet only allow them to cling to vertical surfaces like bricks or trees. That is sufficient for their purposes, because they spend such a small part of their lives down in our terrestrial world.

It isn’t quite true to say that swifts are all wing, but they come as close to it as it is possible to be. By way of comparison, the biggest wings of any bird belong to the Wandering Albatross, a bird much bigger than a swift, with a wingspan of about 10 feet. However, if an Albatross wanted to match the wing-to-body-weight ratio of a swift, it would have to have a wings that are 300 feet across.

In old Persia swifts were called “wind-eaters.” The name reflected the mystery of these birds, which seemed to live in the air, never coming down to eat or rest.

We now know that their diet consists of aerial insects, invisible to us on the ground. The other mystery, of why, outside the nesting season, they never seem to come down to the earth, has been answered only recently, and the answer to that question has merely unveiled new mysteries.

Just a few years ago, it became possible to develop tiny sensors light enough to be attached to the wings of swifts (Common swifts and Alpine swifts) banded during the nesting season. The data from the sensors showed that, astonishingly, the old legends were true.

When they aren’t nesting, these swifts really do live in the sky. After leaving their breeding sites in the early fall, Common swifts and Alpine swifts were found to spend upwards of 200 consecutive days in the air without ever coming down to earth. Not only do they eat, socialize, and mate in the air, they even sleep in the air. At night, they’ll go up several thousand feet to catch a favourable wind current, and then, it seems, they sleep on the wing.

More recently, research on first-year swifts has expanded the picture. First-year birds don’t mate, so there is no need for them to return to nesting sites in the spring. Young Common Swifts outfitted with sensors have been found to spend 300 days or more in the air without coming down to the earth. Occasionally one will come down for a night to escape a storm, but others were found to remain continuously aloft for 10 months. Swifts are estimated to fly at least 200,000 km a year, and since they can live more than 20 years, they will fly several million kilometres during their lifetimes.

It turns out that swifts aren’t the only birds capable of sleeping while they are flying. Great Frigatebirds have been found to remain in the air, above the ocean, for a month or two at a time, without ever landing (unusually for seabirds, frigatebirds can’t land on water).

How swifts and frigatebirds can sleep while flying remains a matter of speculation. One theory is that somehow half of their brain falls asleep while the other half remains awake. Whales and dolphins have evolved similar adaptations. They need to sleep, and yet they have be aware of their surroundings and of potential danger, and they need to wake up in order to come to the surface and breathe. They do it by shutting down only one-half of their brain at a time. 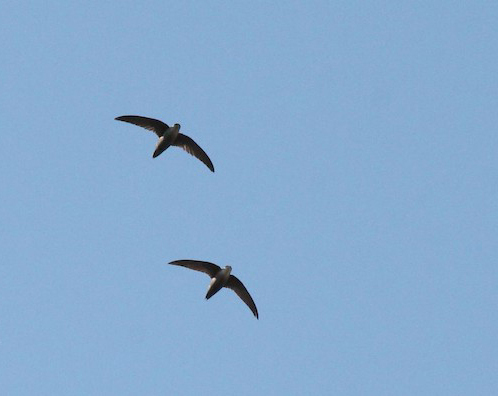 Remarkable as they are, what makes swifts so special to me is not their astonishing biological adaptations, but what they seem to represent.

Earthbound as I am, my options for going places further constrained by a pandemic, I long for their freedom to fly wherever they desire. Theirs appears as the ultimate freedom: soaring far above the earth, as long as they please, going where they please, yet never alone, because they are always with others of their kind, chattering wherever they go.

Most birds embody unattainable freedom to some extent. The robin that comes to my birdbath looks at me with its bright eyes as I look at it: two vertebrates, each of us standing on two legs, facing each other, and for a moment I feel a sense of what we share. Then, in an instant, and with no apparent effort, it takes to the air, and I am left standing on the ground, keenly aware of what it is able to do that I can never share.

Swifts have taken to the sky and liberated themselves from the surface of the earth more than any other bird, and that very fact is part of the reason for the emotional attachment I feel for them. I don’t mind that it is unrequited love: I know they don’t even know I exist, and that’s fine.

There are other birds that have also come as close as possible to severing their ties with the land, in a different way. Ancient murrelets, seabirds that live in the north Pacific, also need to come ashore to lay their eggs, which they do in burrows on the forest floor on Haida Gwaii and a few other locations. As soon as the eggs hatch, the parents leave and return to the sea. From the shore, they call to their chicks, and the tiny day-old chicks rush along the forest floor on their wobbly little legs, to where their parents are calling from. Another mystery, another example of birds’ ability to do things that we don’t even understand, is that each chick is able to distinguish the calls of its own parents. Once reunited, they swim farther out into the ocean, where their parents will feed them. Ancient murrelets spend less time on land than any other bird. I have never seen one, but I am happy to be able to share the planet they live on.

I have been lucky enough to see sea turtles, and their newly hatched young, on the Nicoya Peninsula in Costa Rica. Sea turtles’ sole tie to the land is also the need to lay their eggs. The young head straight for the water as soon as they hatch and remain there throughout their lives until eventually, guided by their own mysterious sense of direction, the surviving adult females swim through thousands of miles of ocean to return to the same beach they came from to lay their own eggs. Their vast world is also one that I can never be part of, and yet in some vicarious way, in my imagination, I claim a small share of their freedom.

I have felt the same way on the occasions I have encountered whales, including one humpback off Newfoundland which swam back and forth underneath and beside our boat, evidently curious about us and what we were doing. It was free to go where it wanted, and yet it took a few minutes to hang around and engage in some human-watching. We felt very privileged.


The natural world is very important to me, and a source of happiness, and for that reason it is also, in these times, a source of pain and grief. Chimney swifts are supremely adapted to a life in the air, and extremely independent, but their numbers, like those of all aerial insectivores, have been declining precipitously. The one thing they cannot adapt to is human-caused destruction of their food supply and nesting sites. Sea turtles have lived in the oceans for 100 million years, but now their survival is threatened by oil slicks, plastics, industrial fishing, beach ‘development’ and the warming of the oceans.

It is not just a few species that are at risk. Plankton, insects, trees, and everything that depends on them: the whole web of life from the smallest to the largest is showing signs of unraveling.

The calamities that are besetting our world have many faces: greed, short-sightedness, militarism, racism, sexism, endless growth – and they all have one name: Capitalism. The source of the problem, and the hope of a solution, lies with our own species: simultaneously the most intelligent, and the most stupid, of all the creatures living on this earth.

The natural environment I am most at home in is a forest. I have spent countless hours in forests, but I have never seen a wolf, though I have heard, and been thrilled by, their distant howls. Even though I never see them, it is important to me to know that they are somewhere out there in the forest, wild and free. I yearn for them to be there long after I am gone. Yet I am afraid that they, and countless other species, including many whose names I don’t even know, may soon disappear from the earth. Knowing this, knowing that we are losing the battle – though it is not lost, and I keep fighting – is a source of profound grief.