Is this how it all ends?

The possibility of nuclear war is increasing day by day.

The mainstream corporate and state media are all pushing for dramatic military escalations. You would think that an order has gone out from the Pentagon to the media, but of course, that’s not the way it works. Our media are more sophisticated: a few key journalists are given exclusive off-the-record briefings by U.S. government officials; those elite journalists produce stories uncritically parroting the line they have been fed, thousands of other journalists and media outlets then produce their own versions of the same talking points, and subsequently those same talking points are amplified by hundreds of thousands of willing accomplices via Twitter, Facebook, etc.

The line that the media is now pushing is that the US/NATO Empire should intervene militarily in Ukraine, including imposing a ‘no-fly zone’, even at the risk of nuclear war. Today’s Toronto Star features an editorial headed “Thinking the Unthinkable.” It acknowledges the risk of nuclear war, but suggests that this is a risk we have to take “actions which were previously unimaginable seem less so by the day.” By previously unimaginable actions, it means taking actions that will very possibly lead to nuclear war. Also in today’s Star, columnist Rosie DiManno takes the same line: she pushes for a ‘no-fly zone’ even though, as she also acknowledges, this might lead to nuclear war. It’s a chance we have to take, she says.

My expectation is that in the next few days we will see a false flag operation involving chemical or biological weapons. It will of course be blamed on Russia. This will provide the needed pretext for military escalation, including direct attacks on Russian forces. The Russians will respond militarily. The ‘West’ will respond with further military escalations. The risks are enormous.

If there is a source of hope, it is that the rulers of the Empire feel the need for some popular support for their actions. We need to do everything we can to undermine that support. We need to speak out, in every way we can, against military escalation and economic warfare, and in favour of diplomacy and negotiations which recognize that Russia, too, has legitimate security needs which need to be addressed.

If we fail, Greg Mello explains how it might all end in this 2017 interview:

Question: How many people would die during the first day of such a war?

Greg Mello: To a first approximation, in a nuclear war between the US and Russia, everybody in the world would die. Some people in the southern hemisphere might survive, but probably not even them.

Even a couple of nuclear weapons could end the United States as a government and an economy. It wouldn’t take a great deal to destroy the “just in time” supply chains, the financial markets and the Internet. The whole system is very fragile, especially with respect to nuclear weapons. Even in a somewhat limited nuclear war, say a war where only ICBM silos and airfields were targeted, there would be so much fallout from the ICBM fields alone that much of the Midwest would be wiped out, including places like Chicago....

Keep in mind that nuclear war is not one or two Hiroshima-sized bombs. The imagination cannot encompass nuclear war. Nuclear war means nuclear winter. It means the collapse of very fragile electronic, financial, governmental, administrative systems that keep everyone alive.... And if enough weapons are detonated, the collapse of the Earth's ozone layer would mean that every form of life that has eyes could be blinded. The combined effects of a US-Russian nuclear war would mean that pretty much every terrestrial mammal, and many plants, would become extinct. 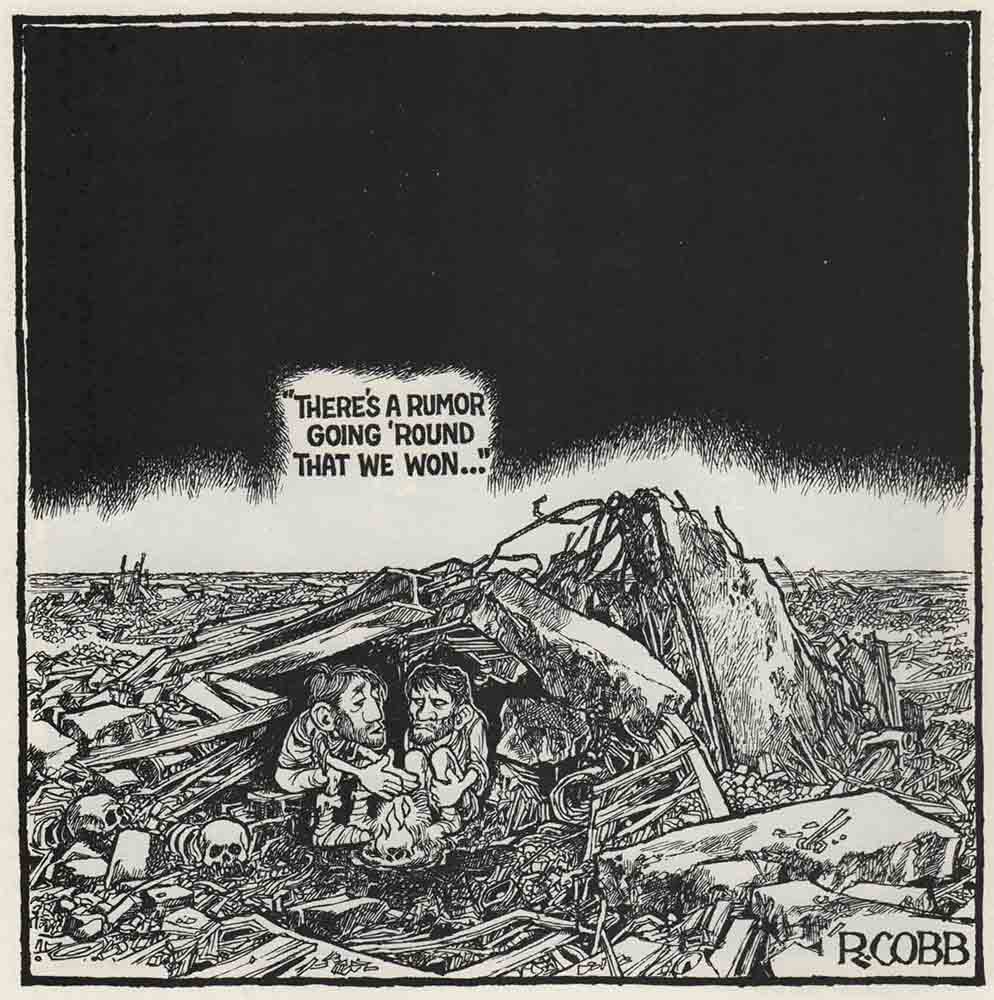